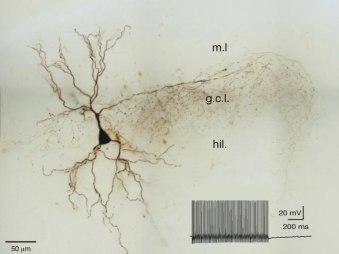 A fast-spiking soma-inhibiting interneuron, a “basket cell” with its characteristic dense axonal arbor in the granule cell layer (g.c.l.) of the dentate gyrus.

iNeurons are not another iProduct, but a class of nerve cell ("neurons") in the brain. iNeurons or interneurons (see Scholarpedia) are found throughout the central nervous system and play a major role in integrating information in neuronal circuits.

Most interneurons in the cortex produce and release the inhibitory transmitter gamma-aminobutyric acid (GABA) at their synaptic terminals and provide inhibition to other neurons in the network.

Although relatively low in number (~10 - 20% of cortical populations), interneurons are highly diverse and their heterogeneity is thought to reflect a division of labor among the different types. Indeed, the various interneuron types are active at different times and can produce inhibition at different locations in the network. This way, interneurons can regulate when and where information flows in neuronal circuits.

A major aspect of this regulatory function is the generation of rhythmic, oscillatory activity.Oscillations (often referred to as 'brain waves') come at different frequencies and can be observed in the electroencephalogram (EEG) and are thought to structure information processing in the brain by providing timing signals.